Sovtest ATE and MicroCraft (Japan) have prolonged their Distributor agreement

Considerable quantity of the successfully realized projects guarantees strong partnership relations between the two companies. Quality control workshops at the Russian enterprises have been equipped with more than 35 Emma testers in more than 10 years. Four test systems have been delivered this year due to the reviewed report within the meeting. It’s planned to double the amount at the lower bound estimation, due to the supply of the latest E8L6151 tester with 8 moving probes, which is the fastest tester in the world at the present time (10 000 points per minute). 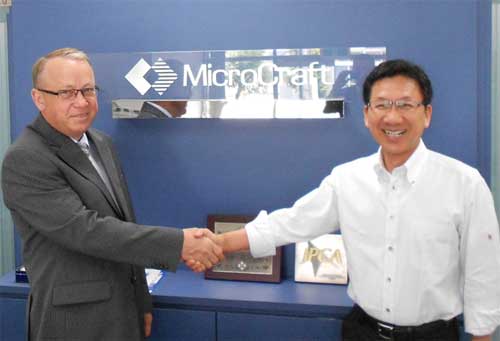 After the Agreement signing, MicroCraft’s production facilities along with the most popular tester models were demonstrated to Sovtest representatives. Design engineers of the testers gave a detailed presentation of the testers specifics and peculiarities.

Attention was mostly drawn to the test system with the moving probes - TDR4033, which is actively used by the companies Intel and AMD. Quality check of the ICs packages coming from the suppliers is done on the testers. This model allows performing automatic testing of BGA and 4C packages wave impedance. For this differential prober with 0,250 mm pitch is used in TDR4033.

Japanese designers have also given the description of the solutions, used for complex PCBs testing - high-performance E8L6151 (for low and medium volume production) with vertical load and F4М6151AL (for medium and high volume production) with horizontal load, which allows to minimize operator’s participation in the test process (all the needed manual procedures are loading the tray with pcbs and unloading it after tests).

Igor Rykov (head of the Test equipment department) comments:
«One of the major criteria while choosing Sovtest ATE partners is its reliability. MicroCraft has impeccable reputation. For example, within the whole time of the partnership between the 2 companies, there was only 1 reclamation, dealing with EMMA tester. This particular tester has been continuously used in 2 shifts for 7 years.
Due to high productivity, reliability and quality, MicroCraft test systems with the flying probes were recognized as the standard in the electronics tests».

Nikon microscopes are used at the quality control laboratories of Microcraft. Sovtest ATE is also the representative of Nikon in Russia and CIS countries.