International Aviation and Space salon MAKS – 2009 was held from August 18 to August 23 in Zhukovsky (Moscow region). 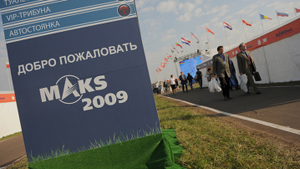 In spite of the economical crisis, MAKS 2009 turned out to have a considerable increase of participants. More than 600 companies (on third part of them are foreign companies). More than 80 airplanes and helicopters took off during the first day of MAKS. Among which it is necessary to mention fighters with unique aerodynamics MiG-29, Su-30 and Su-35. 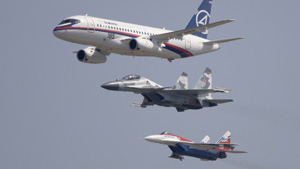 And, certainly, we cannot but mention, modern fly-by-wire regional jet Sukhoi Superjet -100. It was the first time, when this aircraft took place in MAKS and at once the first big agreement was made – Vnesheconombank took the responsibilities of Sukhoi Superjet -100 promotion on Russian and foreign markets. Moreover, on the same day Sukhoi Corporation got a contract on supply of 64 fight jets from the government.
Vladimir Putin was present at the opening ceremony and announced that the Russian government will support aircraft construction as without it Russian economy doesn’t have any future and at the same time it is impossible to provide good defense capacity without modern fighters. 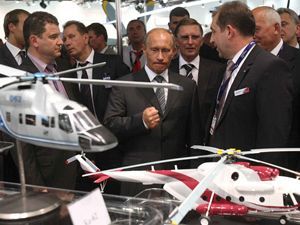 SOVTEST ATE together our foreign partner Cabletest Systems Inc. (Canada) showed our solutions for aircraft construction, particularly, testing systems for faults location and localization and for testing of wires, capacitors, diodes and relays.

Founded in 1982, today Cabletest Systems Inc. is a leader in providing test solutions for aircraft industry. Among its customers there are such “giants” as Boeing, NASA, Honeywell, Harting, etc. Due to the cooperation of Cabletest and Sovtest ATE, solutions of the Canadian company have found its application in Russia.